Click the “order now” button and get an additional $25 off! 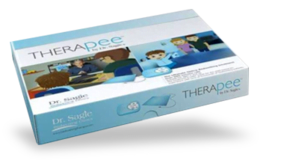 The most advanced and safe bed-pad and alarm system available today.​

Purchase THERAPEE™ for a single payment + monthly subscription fee for the online software until you complete the program.

Purchase THERAPEE™ for a single payment with an unlimited license for the online software (limited for one patient).

For free consultation with one of our bedwetting specialists

I just want to tell you we are so impressed with Dr Sagie’s program!! My 10yo was wet almost every night of her life and finally we learned of Therapee. Within 3-4 months of treatment, my child is dry every night!! The videos from Dr Sagie were encouraging and informative. My child was relieved to discover she was not alone in her struggle to stop bedwetting! The exercises prescribed, as we progressed thru the program, were a big help for her to feel like she was DOING something to make a diff! I give this 5 star review for effectiveness, quality, and EVERYTHING! We cannot thank you enough for giving my child a big boost thru this program!

We started using Therapee in late March for my son who was 7.5 and still soaking through pull-ups several nights a week. He was starting to feel ashamed and wouldn’t go to sleepovers, so I did some research and came across the TheraPee site. I wish I had known about it sooner–the program worked better than I ever imagined it could. The alarm went off the first two nights and he woke up and went to the bathroom, no problem. After that I think he only had 3 or 4 more accidents. He hasn’t wet the bed since mid-May, less than two months since we started the program. The chart seemed to be the biggest motivator–he LOVED adding the stars every morning. He didn’t do the exercises so I don’t think they were a factor, but I can see how they could help others. I can’t say enough good things about it–I highly recommend it!

I was 19 years old and still wetting the bed. I had tried several things before and nothing really worked. I was getting desperate and began searching. It was then that I found therapee. I bought it and used it just as they said, and it worked. I can safely say it was the best money I ever spent. It changed my life.

I purchased this system for my 9 year daughter. She is a very deep sleeper, We had tried everything and nothing had worked. When I found this system and read all about it my husband and I decided to give it a try. Success!! I am so impressed with this simple system. It worked so fast for us, in about a month we saw amazing progress. It really worked. Since then I have used it again with my second daughter, age 6… Success again. Amazing, I would defiantly recommend this system. Thank you Dr. Saige.

He liked it though – did not fight it at least

My son was 11 when we found the TheraPee solution. We had tried most everything we could think of: regular bedwetting alarm, star chart rewarded with money, exam by a pediatric urologist, sleepover bedwetting hormone pills, dietary fiber increase, miralax for 6 months plus and nothing seemed to be working. My son agreed to try TheraPee and it was a slow start. He liked it though – did not fight it at least. He liked that Dr. Sagie gave him exercises to do after each video and he liked the the online chart. He could really see his progress. It worked for us in about 1 month. He was dry for the first time in his life. We are so grateful and highly recommend this device and Dr. Sagie’s system to anyone with this challenge.

When my son was seven, he was still wetting the bed nearly every night and he was getting so frustrated. Our son asked us often for help to make it through the night without wetting the bed between the ages of 4-7. We tried several things that were unsuccessful. Then in the fall of 2016, we found Dr. Sagie’s site and the Therapee program. Best choice we ever made was purchasing this program!! My son felt valued that someone was acknowledging that he was a heavy sleeper. My son gained confidence because there was a plan. And, of course, getting to use a computer program to track his progress was exciting for a seven year old boy. Within 3 weeks, our son completely stopped wetting the bed. We continued to use the system/program for another 2 months, but he never experienced another wet night after the first 3 weeks. Now 2 years later at 8 1/2 years old, and through colds and flus, our son can sleep with confidence in knowing that he won’t wet the bed. I cannot recommend this program highly enough! It was an amazing experience for our family and I am so thankful for the program.

The process was super easy, and my daughter loved the interaction

My 8 year old daughter has been struggling with bedwetting for years. She completely saturated her pull-ups every single night, and rarely had a dry night. She simply never woke up to use the bathroom. I read through every review on Dr. Sagie’s website, not believing the product could work as well as people claimed. Skeptically, I purchased one, hoping that the high price tag was worth it, and knowing that I had exhausted all other alternatives. I saw remarkable progress within a month, and my daughter was completely dry by 2 months of the treatment. The process was super easy, and my daughter loved the interaction with the software. My only complaint would be that the online software needs some upgrading, as it is a little awkward and slow to use. But seeing my daughter’s happiness at finally being dry every night is worth absolutely every penny. I highly recommend this product to anyone; you will not regret it.

Our 7 year old was very responsive to your online interactive program and has really taken to filling in the progress charts and hearing your feedback. He encouraged us to help find a solution to his bedwetting and didn’t want to ‘grow out of it’ any longer. We are thrilled to see him so much more confident in himself now that he is dry at night will definitely be recommending TheraPee to other parents suffering from the same problem.

It worked – we are grateful

This solution worked. Our daughter is 10 and we were getting very frustrated prior to this product. It took a few weeks of patience and then we started to have more and more dry nights. Took about 3 months total and she is now good to go – no issues in over a month. Definitely the combination of the tool plus the website/tracking made a difference – we had tried a previous tool alone without a software package two years ago with no success. I highly recommend this product!

My Son had just turned 7 in December 2017 when I decided we needed to try something.  I did a lot of research on different methods / program etc. and felt very comfortable with Dr. Sagie’s site and program.  Although I have to admit I was not totally clear on “what” I was purchasing.  And was concerned about the cost.

My Son, since he was an infant always was what I called “a big pee’er” in the night.  When he became potty trained by age 3 ½ but was still peeing at night we moved to pull ups, but he would “pee right through them”.  I did some reading and found that putting a “pad” within the pull up worked for some.  This quickly turned to having to use adult pads that were the extra-large size. But still on some nights he would still wet straight through everything.

We did all the things of limiting drinks etc, and had a few good nights, but mostly not.  I think back now on all the laundry I did, and expense on pull ups and adult pads, and wished I tried this sooner.  Although, maybe it was just good timing, but he progressed quickly, I think he and I were ready.

We began the process right away once receiving the items.  We had a few issues with downloading the program (we couldn’t do it on the IPad) had to use the computer.  But, once we were up and running it was all good.

I remember the first night when the alarm went off, and it was a rough one….(OMG I thought this is loud and annoying) But it got easier after the initial shock of waking up in the middle of the night.  My son did really well at waking up and we had our routine.  Our first two weeks we had about half success. Week 3 & 4 – 100%.  My son liked the part of giving himself the star and listening to Dr. Sagie and what he had to say.  He is a pretty observant kid, and did notice that “he sometimes said the same thing” per my son.  But he got it.  The exercises, although we did some more than others I think just brought awareness to him and it gave us things to talk about which I think was helpful.  Week 5&6 and 7&8 we had a couple of times he wet the bed, but very minor and he got up on his own.  And, during this time he began to get the “gold stars” which was very exciting for him !  I could tell we were on the right path.  Week 9&10 and 11&12 no accidents, and we had our last sessions.

So, first off, thank you for helping us through this time in our lives.  For those parents who don’t go through this, it is hard to understand and describe.  You want to protect your child, but not knowing how to help is hard.  You don’t want to “make a big deal” but you want to help.   Money is a factor, but when I look back on how much I spent with pull-ups and pads, and time and washing of sheets, every night…. I do wish I tried earlier.  But, maybe he wouldn’t have been ready.

My advice to parents out there reading my story is try it, and try it now !  Approach it positive and as a team effort.  It might not happen as quickly as ours did, but it will happen and you will be happy you did it !  Keep it consistent and don’t miss a day, it is about the routine.  We would lay out the clean sheet and clean clothes to change into the night before, so to make the transition easier in the middle of the night.  Every morning we went on line and I had my son put in his own information.  We listened to the videos together, we made it a team effort, and that worked for us.  Just know it will get better, and it will change for the best !  Again Dr. Sagie and your team, thank you !

DISCLAIMER:
The opinions expressed here are only the evaluations of the individuals, results may vary from person to person. We cannot guarantee the same results for every client.