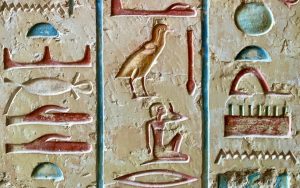 The problem of bedwetting was not “invented” in the twenty-first century. In fact, it dates way back, and even occupied the ancient Egyptians. As early as 1550 BC they began to treat bedwetting. Evidence of this was found in papyrus writings from that period. The ancient Egyptians used a potion made from sugar canes, known for their liquid-adsorption capabilities. The canes’ fibers were used to concoct an effective potion to stop bedwetting. The canes’ ability to absorb liquids has made the concoction effective.

The sugar canes fibers absorb free water from the blood vessels into the intercellular system, so that the kidney receives a message about a lack of fluids and therefore stores them, in order to maintain the fluid balance in the body. The result is a slowdown in the rate of urine production that facilitates the operation of restraint at night, because the bladder receives a reduced amount of fluid. The drug Minirin was used for treating bedwetting from the early 1980s, and works on a principle similar to the one that the ancient Egyptians discovered more than 3500 years ago.

In the kingdom of Dahomey in West Africa, bedwetting was treated in a unique way. The mother carried the baby in her arms. When she felt he is restless she lowered him to the ground to urinate. Over time, usually at the age of two, the learning process was complete, and the child was weaned. When the child did not respond to the weaning method and continued to wet until the age of four or five, the first stage of the “treatment” was to beat the child. If that didn’t help either, a mixture of ashes with water was poured over the boy’s head, who was then taken outside to the street. In the street, all the children in the village welcomed the poor boy with applause and chased him while singing “Adida, ga, ga, ga, ga, pee everywhere.”

In the state of Ouidah, (now Benin), a large frog was attached to the waist of the unfortunate bedwetter. The frog caused the child such great fear that he was “forced” to stop wetting.

Native American parents of the Navajo tribe were not generally bothered with behavioral issues of their children, except for three: dominance of the left hand, bedwetting and sleepwalking/talking. The “treatment” for bedwetting was forcing the child to stand naked with his legs spread apart. Then, a nest of the Spur-winged Lapwing was lit between his legs. The rationale behind the “treatment” method was that birds do not wet their nests.

Over the years, various methods for treating bedwetting have been developed, some more effective and some less so. Unlike the above “treatments”, which caused the child a great amount of stress and even trauma, modern treatment is child-friendly and painless. The positive treatment process results in dry children who are also happy, healthy – and proud.